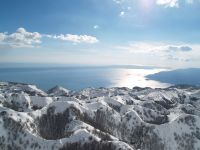 Biokovo is the limit of two climates

The climate on Biokovo is the result of latitude, its geographical position in the Dinaric mountains, geological structure, relief, altitude, exposure to the relief air circulation, vegetation cover and other factors that have a significant impact on microclimatic characteristics of this mountain.

The climate on Biokovo is the result of latitude, its geographical position in the Dinaric mountains, geological structure, relief, altitude, exposure to the relief air circulation, vegetation cover and other factors that have a significant impact on microclimatic characteristics of this mountain. Biokovo is the limit of two climates - Mediterranean and continental, and it determines the specific climate of Biokovo.

Air masses from the sea penetrate its coastal side, over the ridge and the surface of the mountain peaks. Biokovo mountain peaks to the north keep the penetration of cold masses from the interior of the continent, but also the interior flow into the Mediterranean. Biokovo air masses collide with mountains and sea. This confrontation of different air masses causes frequent changes of weather, which in the fall leads to excretion of rain and snowfall in winter which is retained in the spring. How important is the slope, direction and height of the mountain side, as as important as the geological composition of soil and vegetation cover.

The forests act as a kind of regulator precipitation, wind and heat. These are all factors that affect the elements of microclimate. In the general climatic characteristics of temperature inversions, the vertical currents and winds should be noted. All of this contributes to the diversity of the climate.

The mean annual temperature ranges from 15.5 ° C in Makarska to 3.9 ° C on the top of St. Jura, which shows distinct climatic differences (temperature difference of 11.6 ° C at a distance of 3 km).

Temperature differences during the day and night are very significant, especially in the valleys. In summer, during the days in the valleys there is more hot air, hence they there are hot summer days and cold nights. During the winter nights and days, the temperatures can be up to 10 degrees lower in the valleys and river valleys than on the surrounding peaks. All higher positions are warmer in winter.

When the coast has the absolute daily maximum air temperature of 40 ° C, then there is high heat. During this time Biokovo does not feel the heat. It is full of clean and crisp mountain air without heat. July and August are the warmest months of the Biokovo mountain, but the mean monthly air temperature does not exceed either of 23.9 oC to 15 oC. It is important to note that the slope is never free of ice in deep sinkholes, caves and ice caves.

The most precipitation falls in the colder autumn and winter months, much less in the spring. The maximum rainfall month is December. A little more rain falls in April.

But all this is true only for the lowest coastal areas, as well as for the villages in the narrowest hinterland part of Biokovo where one can expect a significant increase in rainfall. In Imotski, which is distanced from Biokovo, there is still only 1310 mm of annual precipitation to 1067 mm, as recorded in Makarska. However, on the coastal side Biokovo, in its higher elevations, especially in the area of the highest ridge, precipitation is much higher. According to the 12- yearly measurements of rainfall using a totalizator under Vošcem (at the Mountain Lodge, at the height 1370 mm), it can be said to directly behind the coastal range peaks of Biokovo on average 1845 mm rainfall falls annually. In the highest part of Biokovo and in the most contentintal part the the rainfall is certainly greater.

In the higher parts of Biokovo regularly above 800 m, precipitation occurs during the colder period (from late autumn to early spring) in the form of snow. There are snow reserves regularly until early summer. 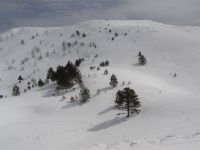 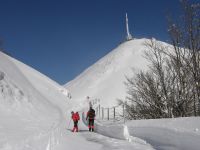 In the area of Biokovo there is a staggering percentage of relative humidity. It depends on various factors, on the season, weather, altitude and type of terrain.

The low percentage of relative humidity is recorded during the flow of dry air, especially during a storm. In contrast, in humid months, during the frequent cloud coverings and fog, there is a lot of humidity in the air. The humidity content of Biokovo us sometimes up to 90%, and more.

The Makarska Riviera and the lowest coastal parts of Biokovo have very little humidity. The higher parts, especially areas in the coastal range peaks, are abundant with frequent, though usually transient fog mists that occur during the warmest days.

Especially here are cooler and rainy periods, which are rich in fog in the higher parts of Biokovo reserves for longer periods of time.

In the lower regions frost is rare. With height the occurrence of frost is more frequent and more lasting. There is no damaging effects on the October vegetation than on the rock mountain belt, where the influence of late frost can damage unleafed trees.

Early autumn frost begins sometimes in September, and regularly in early October. Late spring frost occurs in April, and often in May. At altitudes above 1200 m there are no summer months which would be completely safe from the occurrence of frost.

In this area the prevailing winds are from the north and northeast (bora). Of marine winds the greatest importance for vegetation is the southern wind, and the bora for the contintental part.

Jugo is a warm coastal winds, with the source area being the air mass north Africa. When crossing over the Mediterranean Sea, the air becomes moist, and it arrives to our region warm and humid. It usually brings rain, increased humidity and air temperature. A special form of the southern anticyclonic jugo or the "thumb" when the temperature is increasing, but is dry and "burns" the vegetation.

The bora is a cold continental wind, which is caused by an overflow of cold air that filled the Pannonian Basin and pours over the Dinaric Alps. It usually blows during the colder months of the year, drying out the air and soil, lowering the temperature, increasing evaporation and transpiration. We can generally say that all places on Biokovo, in all seasons are exposed to the Bora. The Bora has a crucial effect on the maintenance and dissemination of sensitive Mediterranean trees and shrubs, while the Jugo and other sea winds favor the growth of evergreen trees and shrubs. That is why it prevails where the greatest impact of these winds are, on the southern slopes facing the sea. Those areas that are more exposed to winds from the north are covered basically or completely with October elements.

In the warm months of the year the coastal breeze blows frequently. Mistral blows at a steady pace and is characterized by beautiful and stable weather.